I had now owned and driven this car for a little while, and became interested in enhancing its’ performance a bit.  My friend Jim had a copy of the Ford Muscle Parts book.  This book was published by Ford, and contained proven engine combinations using Ford factory performance parts.  The engine combinations had really cool names like Impressor, Controller, and Dominator.  I Xeroxed Jim’s copy and spent hours studying it so that I could come up with what I thought would be the perfect bolt on engine combination for my Mustang.  Eventually I developed a plan that involved a rebuild and internal modifications, with later bolt on modifications to follow.  I don’t know what happened to my copied pages after all of these years.  After searching the Internet I recently found a copy of the relevant pages on Woody G’s Fairlane site.  Things have advanced a bit since that book was published, but at the time I considered it the gospel.

I purchased a Ford windage tray to help control the oil in the oil pan and keep it off the spinning crankshaft.  That particular part is still in use on my current engine today.  The muscle parts book said I should replace my harmonic balancer with a more performance oriented part.  So I ordered a balancer and timing pointer. I also purchased a solid lifter camshaft from the 427 high performance motor along with the requisite rocker arms and pushrods.  There was a Ford dealer that still stocked the camshaft, but the rocker arms were more difficult to locate.  I ended up visiting several Ford dealers in my area and bought whatever remaining stock they had until I had enough rocker arms to make a complete set.  The switch to a solid lifter camshaft proved to be my undoing in this plan, but I wouldn’t learn that lesson until I started my newly rebuilt motor for the first time.

I received assistance from several of my friends during the rebuild process.  Some of it was even helpful.  Eventually I managed to collect all the parts, have the machine work done, assemble the engine, and get it installed back in the car.  The big moment when I fired up the engine had finally arrived.  Once it started it ran rough and made a loud tapping sound.  I pulled the valve covers back off and inspected the valvetrain.  It turns out that the engine had short valve covers that didn’t have sufficient clearance for the adjustment screws on the rocker arms.  The previous hydraulic camshaft didn’t have these adjustment screws.  So the adjustment screws were coming into contact with the underside and baffles on the valve covers.  The end results was a few bent pushrods and one pair of very badly dented valve covers.  I replaced the bent pushrods and began a search for a set of valve covers that would clear the rocker arms.  The first pair I ended up with cleared the rocker arms, but hit the master cylinder and power assist when the motor vibrated.  This ended up ruining my master cylinder.  Eventually I came up with a pair that cleared everything off of an old Mercury engine.  But the first pair of valve covers I bought in the interim had an interesting story to go with it.

I had been religiously searching the classified ads for performance parts every week.  Eventually I found an ad with quite a bit of performance parts, including a set of valve covers and a set of headers that should fit my car.  I called the number in the ad and set a time to look over the parts.  The gentleman who had placed the ad was into performance cars.  His son also was into the hobby, and between the two of them they had quite a collection of parts stored in a garage behind their house.  He walked me back to the garage and opened it up.  There hanging on the wall was the rusty set of headers he had for sale.  I wasn’t very impressed with the condition they were in as I didn’t have a good way to clean them up.  He did have a pair of valve covers which I ended up buying.  They fit the motor and almost cleared the master cylinder.  A little bit of grinding on the valve covers got them closer, but still not quite right.  But then I looked around the garage and was amazed at what else I saw.

What I saw was a 1969 Mustang with a rather large hood scoop and some special markings on the front fenders.  What I was looking at was a genuine Boss 429 Mustang that this gentleman had sitting in his garage. For those who don’t know what a Boss 429 Mustang is I’ll try to explain.  In 1969 the major American car manufacturers were all involved with racing, based on the belief that cars that won races also sold well.  I believe the slogan was something like “Win on Sunday, sell on Monday”.  NASCAR racing was one of the most popular racing venues back then, as it still is today.The Chrysler corporation had a great engine known as the Hemi, named for its’ hemispherical combustion chamber head design, which made them a dominant force in most forms of racing at that time, including NASCAR and drag racing.  In fact, in top fuel and funny car drag racing those engines still dominate today.  That’s how successful that engine has been, and the name Hemi is still legendary with automotive enthusiasts today.  Ford attempted to counter with a new engine design known as the Boss 429.  NASCAR homologation rules stated that at least 500 cars fitted with this engine had to be sold to the general public in order to be legal for racing.  Ford could have installed this engine in one of their larger cars, but instead chose to install it in the Mustang body, which was no small feat as the engine was so wide and the Mustang engine compartment was not.  Ford contracted with a company called Kar Kraft to convert regular Mustangs off of the assembly line into Boss 429 Mustangs.  Fewer than 1500 of these cars were built and are pretty rare and very valuable today.

Here’s a picture of a Boss 429 Mustang 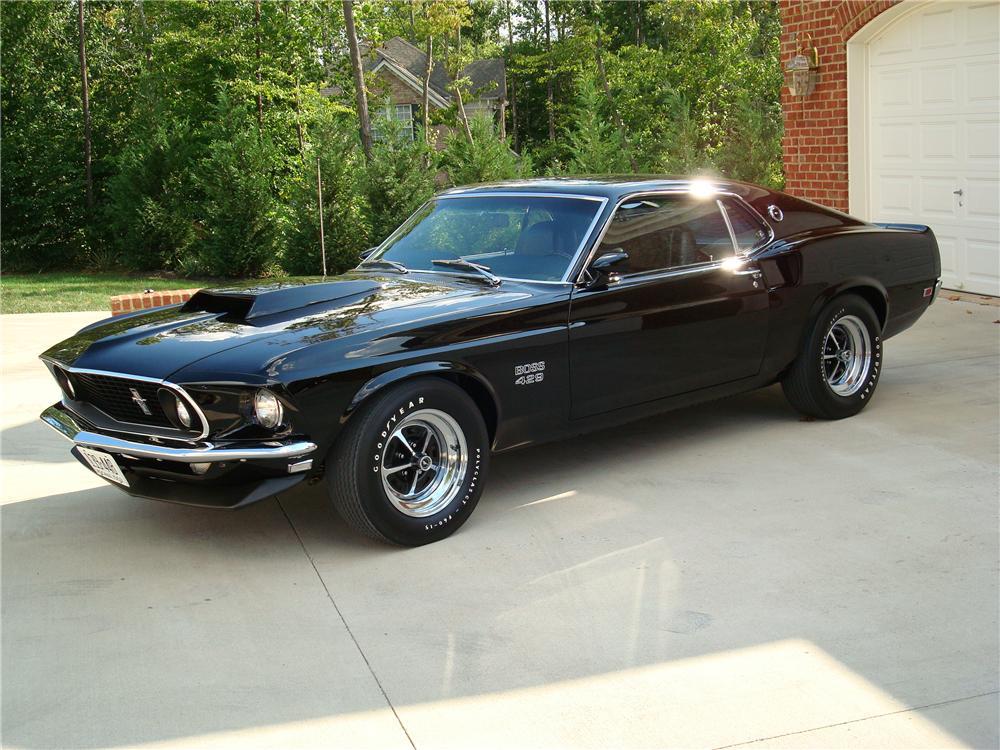 The car I was looking at had an unbelievably low number of miles on it.  I can’t remember exactly right now how many miles it was, but I want to say something like 600 miles.  All I can remember for sure is that it was practically brand new.  Except for one thing.  It had no engine in it.  However right next to the car was a brand new Boss 429 engine sitting on a stand.  When I asked the man about the car and engine he explained that he had purchased the car new.  The engine had failed while the car was still under warranty.  So he pulled the engine and returned it to Ford for post mortem analysis.  Ford supplied him with a new engine under warranty for him to install himself.  He further explained that Boss 429 Mustangs came with one of two versions of the Boss 429 engine.  There was an “S” version and a “T” version.  According to him, counter-intuitively, the “S” version was a track version and the “T” version was a street version.  He had originally had the “S” version, and the replacement from Ford was the “T” version.  So he was involved in a debate with Ford over whether he should get the same type of engine his car had come with originally, which was the “S” engine , or the current replacement “T” engine.  I don’t know how the discussion ever turned out.  I’ve also heard different versions of which engine was more desirable and why.  But this is the engine story as I recollect the gentleman explaining it to me.  All I know is that I drooled over car, and then paid for my valve covers and left.  But there could still be an exceptionally low mileage garaged Boss 429 Mustang with a brand new engine out there somewhere.

Here’s a picture of the Boss 429 engine that made that car so special. 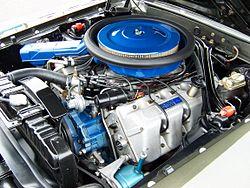 I have another Boss 429 Mustang story I’m saving for later.  As far as the rebuilt engine turned out, I’m happy to say I did eventually get it running.  There was an issue with oil leaking, and I had to reinstall the intake manifold to fix a problem with coolant being sucked into the engine and blown out the exhaust.  I also had to pull both heads and have the valve guides replaced as the rebuilt engine was burning oil that leaked past the valve guides.  But this wasn’t the last engine I installed in this car.  But I got a whole lot of miles and enjoyment out of this one, as well as the satisfaction that I had rebuilt it myself.

***UPDATE***
Mustang Monthly has published an article about a Boss 429 Mustang and the owner’s story matches what I remember almost exactly. The story is from 2009, but I didn’t see it until recently. Here’s the link to the story.