Yesterday I had an opportunity to make the trip out to the shop to see how my Mustang was doing.  When I arrived Val had just removed the instrument cluster in preparation for repairing the power brake booster and clutch pedal assembly and linkage.  Before I left my house Val had called and asked me to bring my new instrument cluster housing and lenses.  Once he had removed the old instrument cluster from the dash he handed it to me and said I should get busy replacing the housing and lenses.  So I sat down with the cluster and my new parts and began dis-assembly and reassembly.

Everything came apart easily enough and while it was apart I checked all of the light bulbs.  They all worked, but i replaced one as the socket was coming loose from the bulb.  The I removed the old lens retainers from the old housing.  One of them had rusted, so Val glass beaded it and repainted it flat black.  Everything else went back together with no issues except for the speedometer lens.  My instrument cluster had the speedometer with a trip odometer.  However the lens was for a standard speedometer.  Val drilled a hole in the new lens using the old one as a template.The only difference between this modification and the correct lens is that the correct lens has a shoulder for the reset button.  The shoulder isn’t visible unless you dis-assemble the cluster and everything worked OK without the shoulder.

When I arrived Val had already removed the transmission, bell housing, clutch linkage, and old exhaust system.  The rear end and springs had been installed, so I could get a feel for the ride height which is fine for now.  I can revisit the ride height after the car has a full interior and the springs have settled some.  Val said he drove the car around the neighborhood and the ride was very stiff.  So there may be more suspension work ahead of me.

While I worked on the cluster, Val removed the power brake booster and clutch pedal assembly.  He replaced the spring and pedal bushings and then reinstalled the pedal assembly.  He also did some adjustments on the parking brake assembly which was not bolted on tight when he received the car.  He also showed me that the under car clips and hangars for the parking brake had not been installed in their correct locations when the previous shop had replaced the floor boards.  They would need to be re-positioned, which will require cutting and re-welding them in the right place.

At that point Val went to reinstall the rod that goes from the clutch pedal to the clutch z-bar.  One end was so badly worn that the rod was not usable.  It should have had a bushing to prevent that wear, but the bushing was missing.  Also the boot that goes over that rod was torn and needed replacement.  So the day pretty much ended at that point with a few more parts on order.  But Val expects that he should have the car buttoned up and ready to get back to me some time next week. 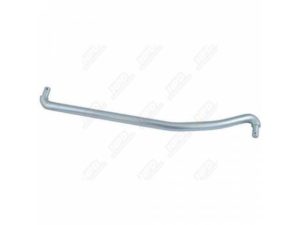 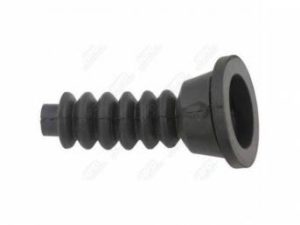