At the time I was first getting my car painted there were several types of paint that were in common use.  Most people either used lacquer or enamel based paints.  Polyurethane based paints were just starting to become popular.  I am not a paint expert, but I will share my understanding based on my friend’s experiences with painting their cars.

Back in those days many people painted their own cars in their garage.  Lacquer paint was pretty popular for this purpose.  It is a fairly soft paint and needs to be polished to get a really good shine.  For a home painter this was good because any runs or imperfections in the paint would be removed during the polishing stage.  But the polishing took a lot of work.  Charlie, my neighbor who worked as a mechanic owned a Camaro that he did all the work to, including paint.  Charlie’s Camaro had a Chevy small block and a 4 speed transmission along with some healthy gears in the rearend.  And Charlie didn’t baby his car.  He always drove it hard, including running it at the local drag strip.  I remember when he painted the car light blue in his garage.  The paint was lacquer and it had a nice shine to it after he got it all buffed out.  Unfortunately he also managed to chip the paint in the process.  That was the issue with lacquer.  It chipped fairly easily.

Enamel paints were supposed to be harder and could hold up to chipping better.  But being harder it was also more difficult to polish to get it to shine.  Professionals had the equipment, but most home garage mechanics didn’t.  So it had to be laid on pretty much teh way you wanted it to look.  Also, lacquer was very popular at the time for show cars.  Custom painters liked it because they could polish for that perfect shine.  So even though some car manufacturers used enamel at the factory it didn’t seem to be as popular with the people I knew.

Charlie’s brother Pete had a 1965 GTO that I really liked.  It had a few issues now and then.  When he bought the car it had wheel locks, but no wheel lock key.  Another friend who lived in the neighborhood, John, was just the guy to solve this type of problem.  I could probably fill a whole blog just with stories about the trouble John used to get into.  Anyway, John made short work of the wheel locks using a chisel and a hammer.  I helped Pete with some wiring issues on the car.  I remember being stranded with him one day when the car stalled and wouldn’t start.  Looking under the hood we found that the wiring harness had somehow gotten wrapped around the steering column.  Between the two of us we got it unwrapped enough to get us home.  But the reason I mention Pete’s GTO is because he planned to paint it red using this new type of paint made by Dupont called Imron.  It wasn’t lacquer or enamel based, but was polyurethane.  It was supposed to shine and also be extremely tough so that it could hold up to parking lots and everything we put our cars through.  Pete did get it painted and I thought it looked pretty sharp.  Pete sold the car when he removed everything from the trunk and discovered that he could see straight through to the ground.  Rust had taken its’ toll on the old GTO.

When I discussed painting my car with the painter I had found, he stated that his preference was to use enamel paint. He mixed in a hardener so that it would be even more chip resistant.  This all sounded good to me because I intended to use the car as my daily driver.  I left the car and new chrome trim at the paint shop and patiently waited to hear back about my car from Rick.  I was invited to come visit every once in a while to see the progress being made.  To me everything was looking good.  Years later I discovered that some of the body work involved using pop rivets to hold metal patches in place.  But you couldn’t tell from looking at it.  The paint was shiny, the body was fairly straight, and the new chrome trim looked great.  Unfortunately a fly landed on the hood while the paint was wet.  They promised to fix ti for me but they never did.  I also requested they give me a receipt for the work so I could prove the value of the paint job to my insurance company.  Apparently this was a problem for them.  Eventually I got a receipt with completely bogus signatures on it.  It seems that standing behind their work was asking too much from them.  I ran into the younger painter a couple of years later and he said he now understood why I wanted a receipt for my insurance company.  Turns out he was in an accident and was having a disagreement with his insurance company on the value of the car.  Some people have to learn things through hard experience.

Here’s how the car looked when I got it back from the painters. I took these pictures on a fairly cloudy day. 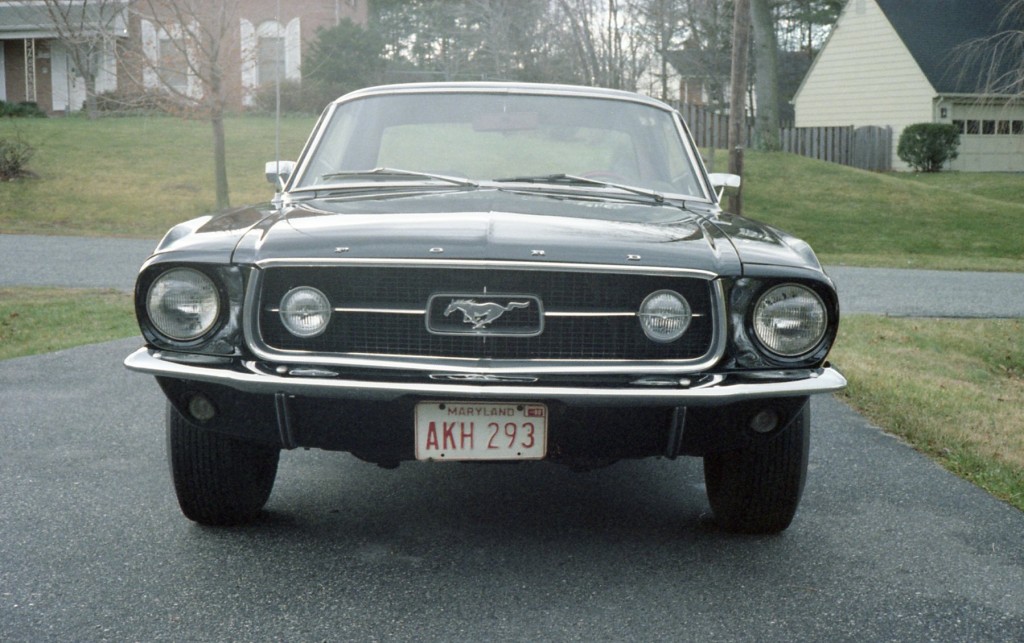 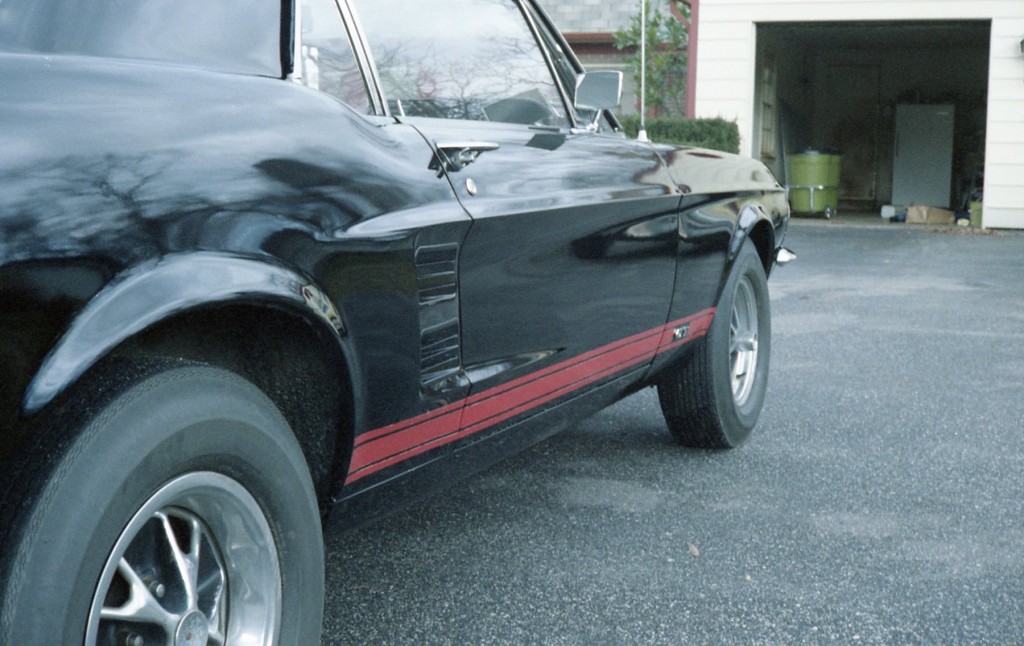 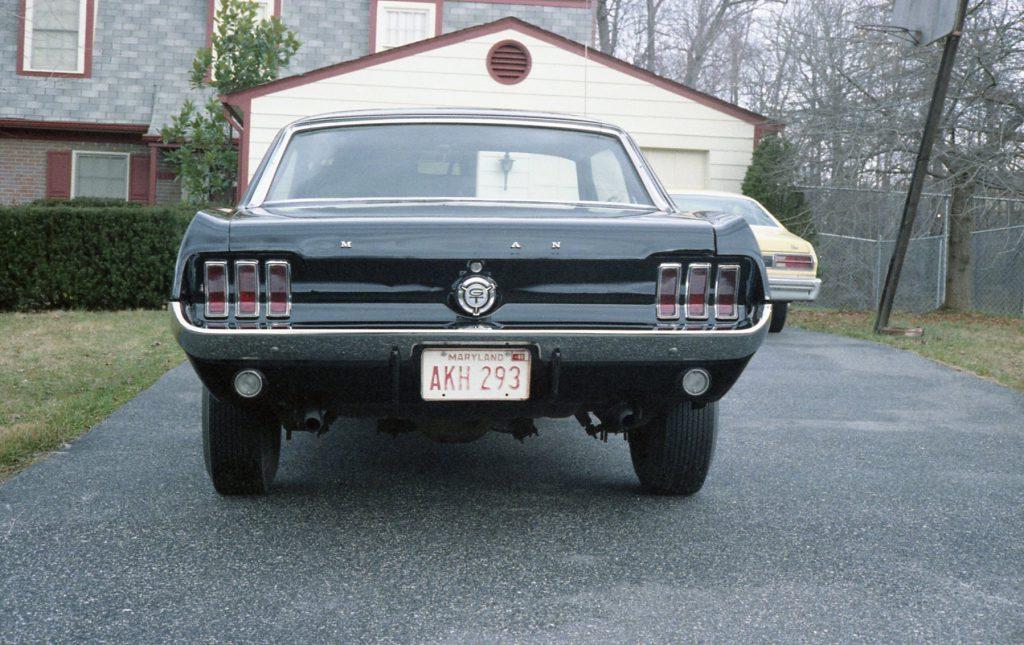 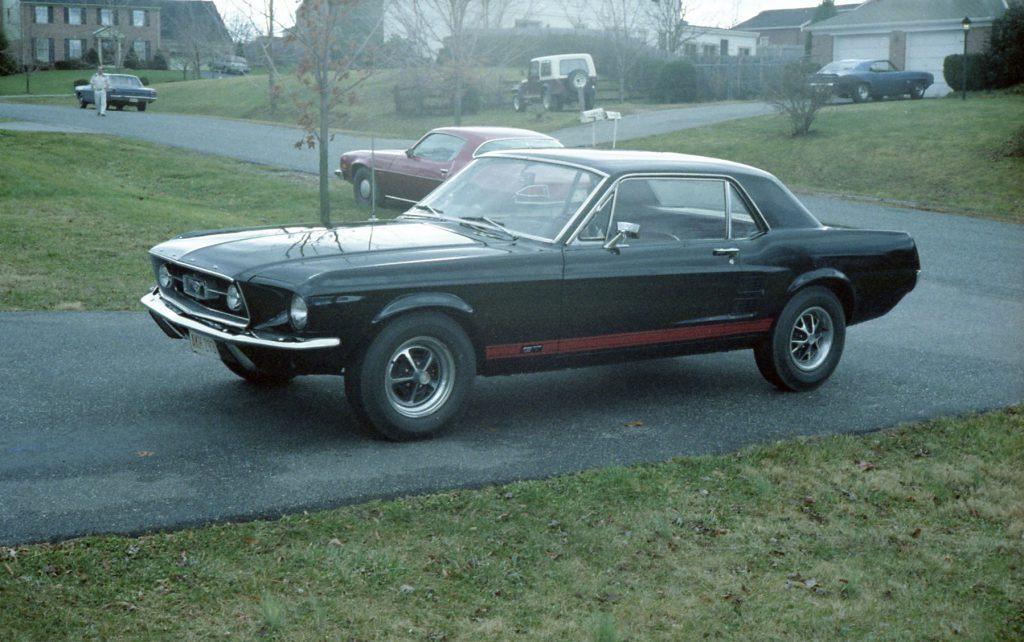 In the background is my Mom’s 1976 Camaro. In the driveway way in the background is James’ Camaro. I think it was 1967 but i may have that wrong. That car was painted blue and had the stripes on the hood. Wish I had a close-up picture as that car really looked nice.